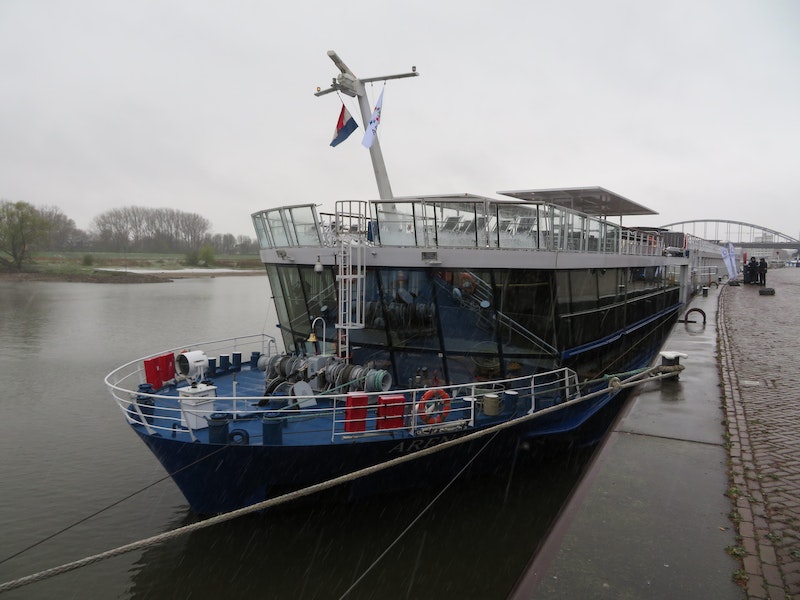 What it looks like on Arena River Cruises’ newly launched flagship

The river cruise arm of British tour operator Arena Travel has finally launched MS Arena after a two-year delay due to the pandemic.

The value-for-money line, aimed at British and Irish passengers and still with an English cruise director, describes the 192-passenger ship as its “premium” flagship offering four-star service. MS Arena was built in 2005 and previously sailed as MS Flamenco for German line Nicko Cruises. It has been completely renovated since its takeover by Arena. We are on board the MS Arena for its first navigation on the Dutch waterways. The ship also sails on the Rhine, Moselle and Danube. Here are our first impressions.

Surprisingly, for a budget-conscious ship, each cabin has a panoramic picture window that either opens onto a French balcony – where you can peek in rather than step out – or swing open to let in fresh air. The cabins are spread over two decks and there are no water level cabins on the lower deck with fixed windows.

The refit has included hotel-style beds installed in all 24 bar cabins. These cabins have a rollaway bed and a sofa bed. Some of these cabins are reserved for solo travelers. All cabins are the same size, 140 square feet, and the ship has no suites.

There is plenty of storage and we appreciate having good wooden hangers, rather than fixed ones, and a plug-in hair dryer.

Arena offers very good value for money. One of the ways to keep fares affordable is to not include wine and drinks with lunch and dinner, which is common on most river lines. That said, the drinks are very reasonably priced. A beer at €3.70, a glass of wine at €4.90 and a cocktail at €8.70. Bottles of wine are from €24.

Additionally, passengers can pre-book a premium package for €20 per person per day. This includes unlimited drinks with meals, bottled water in the cabin, a 10% discount on excursions not included in the rate, upgraded toiletries and other perks.

Everyone commented on the badges worn by staff, who all wear face masks (although passengers are no longer required to wear them). In addition to their names, they have “the smile behind the mask” badges with photos showing what they look like without a mask. It’s such a nice touch and conversation starter, and helps crew members really engage with passengers. We are surprised that other cruise lines have not thought of doing this.

The ship has a relaxed and friendly atmosphere and the crew members are very visible and happy to help. The cruise director has a glass-walled office and passengers can drop by whenever he’s there, and the chef and kitchen team members come out to greet people in the restaurant. A passenger asked for the recipe for a particularly delicious apricot pie and the chef was happy to share it.

Everything stops for tea…

At 4 p.m. sharp, traditional British tea time, afternoon tea is served in the drawing room. It’s a much-anticipated daily event and passengers gather in the lounge in anticipation of high tea served with a variety of treats such as sponge cake and Dutch apple cake.

…And there is homemade food

As Arena caters solely to the UK and Irish market, it’s no surprise there are plenty of familiar favorites served at mealtimes with a bottomless pit of English tea bags at the tea and coffee station. 24/7 (we have seen minor mutinies in international markets). lines when the tea runs out).

The breakfast buffet has all the components of a full English – including baked beans – and although the marmite and gravy has yet to make an appearance, you can probably expect it at the moment. coming. In addition to regional dishes, you can also expect to see mainstays such as bread and butter pudding on the lunchtime buffet or the evening a la carte menu.

At the start of the cruise, anyone with dietary requirements, such as vegetarians, is given a card to be given to the restaurant manager at the first meal. This is a good idea as it allows servers to easily locate these passengers at each meal and ensure smooth service. Seating is at assigned tables, assigned at the start of the sail, although if someone wants to move that wouldn’t be a problem.

There are plenty of luxury river ships out there, but Arena shamelessly puts the MS Arena as a four-star ship. It certainly fills a gap for anyone looking for affordable river cruising – including early river cruisers dipping a proverbial toe in the water for the first time – coupled with the comforts of home.

What to know about debt consolidation offers