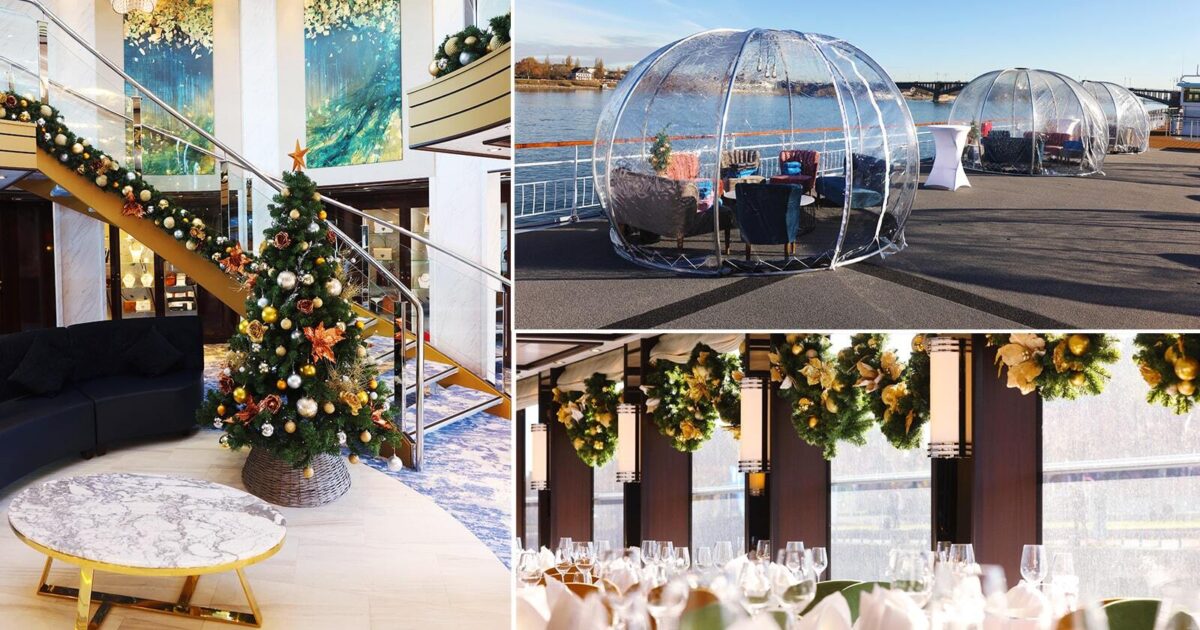 TUI Skyla, the second ship in the TUI River Cruises fleet, set sail today on her first route to Germany after a baptism on board. What’s on the boat?

TUI Skyla will cruise on festive itineraries calling at some of Germany’s best-known cities, including Cologne, Dusseldorf and Koblenz.

Here, TUI River Cruises guests will get into the festive spirit by visiting the country’s famous Christmas markets.

On board, guests can enjoy festive activities such as sipping mulled wine and tasting regional Christmas dishes.

The new ship was christened before its first departure on TUI’s Gui & Rhin route.

To celebrate the launch of TUI Skyla, a winter wonderland-themed upper deck has been created with igloo-style modules, a live choir and festive treats.

Additionally, along the dock, sparklers signaled that TUI Skyla was officially joining the fleet.

Chris Hackney, Managing Director of Cruise TUI UK, described his excitement: “We are delighted to welcome the second ship in the TUI River Cruises fleet on our first festive sail of the year.

“Since going on sale, we have seen continued growth in demand for TUI Skyla Danube routes, with Danube Treasures being the top seller.

“The feedback we’ve had from customers sailing TUI Maya, which launched in August, has been incredible, so we’re excited to offer even more to our customers and look forward to completing the fleet with TUI Isla in the spring. next. ”

– LEARN MORE: How to choose the right river cruise company for you –

Winter and Christmas cruises continue to be extremely popular with customers, particularly during the winter and festive seasons.

If you’re a solo traveler and still want to experience this remarkable route, don’t worry, TUI River Cruises has increased its Solo Cabin offering over the Christmas period by making all Twin Cabins available on all of its Christmas sailings.

Customers can also get into the Christmas spirit on another of TUI’s itineraries: Yuletide Wonders.

So what can you expect from TUI Skyla, from cabins and restaurants to entertainment?

There are six different cabin options on board the TUI Skyla.

The next cabin is the 15m² Superior Cabin with a king-size bed, large dressing table and chaise longue with drinks table, tea/coffee making facilities, Smart TV and Molton Brown toiletries.

– READ MORE: How to choose a river cruise cabin –

Fitted with a French balcony, floor to ceiling doors, fixed double bed, Smart TV, Molton Brown toiletries and tea/coffee making facilities, the French balcony cabin is another option on board.

Three restaurants are available on board the TUI Skyla: Verdastro, Bistro and Al fresco.

Verdastro is an elegant restaurant that serves breakfast, lunch and dinner with a menu that changes daily.

– LEARN MORE: What is it like on board TUI River Cruises’ first ship, the TUI Maya? –

Bistro is a bit more casual than Verdastro and the menu changes halfway through browsing.

Al fresco dining is the final dining option on board which will host outdoor events when weather permits, such as barbecues.

There are two main entertainment options on TUI Skyla.

The observatory lounge sits at the heart of our ships with all its different locations.

There are widescreen windows where cruise passengers can take in the scenic views and there’s a happy hour between 6:30 and 7:30 p.m.

The Observatory hosts nightly entertainment from talented musicians and quizzes to international and local guest artists.

There is also the Club Lounge on board where coffee and cocktails are the cornerstones.