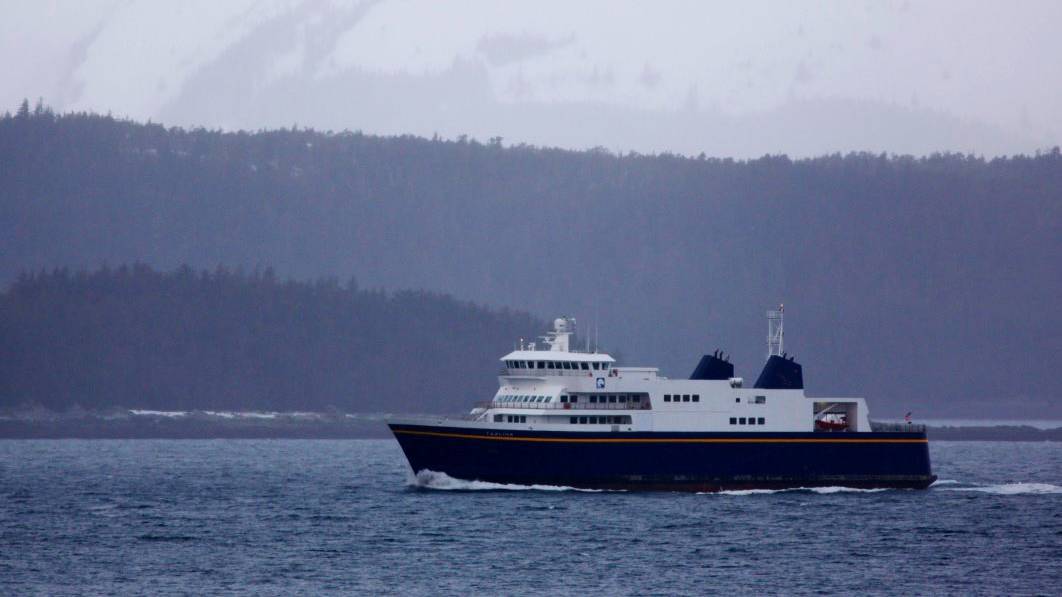 The state’s $60 million Tazlina ferry comes to the rescue of several Southeast Alaska communities, each with their own transportation challenges.

State Department of Transportation spokesman Sam Dapcevich said Friday that the Alaska-class ferry will be in action in February and March, serving Angoon, Gustavus, Hoonah, Haines and Skagway from its base in Juneau.

“We’re really happy to be able to make this work for northern begging communities,” he told CoastAlaska.

The Upper Lynn Canal and Southeast villages were facing a winter service gap of more than two months.

In Angoon, the state ferry carries “everything from soup to nuts,” and Angoon Trading Company, the town’s only grocery store, is struggling, says co-owner Shayne Thompson. He is chartering a landing craft to bring in bulk groceries next week to stock the store before the state ferry arrives Feb. 10.

The island village was recently visited by a Goldbelt, Inc. passenger-only catamaran on a Jan. 24 tour that included Juneau and Tenakee Springs. It cost the state about $6,860, but was only a one-way ticket.

Thompson says that hasn’t worked for people trying to get to Juneau for shopping or medical appointments.

“People aren’t going to jump on a ferry if there’s no way to get back but to fly,” he said. “Because a lot of people who take the ferry don’t like to fly.”

Attendance records show eight passengers arrived from Juneau on January 24 and seven left the Admiralty Island community while this catamaran was sailing.

Angoon does not have an airport. It has seaplanes, which are often delayed in winter. And Goldbelt’s charter boats couldn’t carry vehicles or pallets of groceries for Thompson’s store.

“I don’t think catamarans are the way to go this time of year,” Thompson said.

Tazlina has seen little action since entering the service in 2019

Questions swirled for more than two months over whether the state would activate the Tazlina, which was docked in Juneau’s Auke Bay as a fleet reserve vessel.

“We raised this issue months ago,” said Earling Walli of the Pacific Boatmen’s Union, the largest of the three crew unions. “It’s supposed to be a stand-by ship.”

In recent months, the DOT has used crew shortages as justification for keeping the Tazlina tied to the dock.

But there were other factors. Some of Tazlina’s certificates were expired, meaning she did not have Coast Guard clearance to sail immediately.

Dapcevich says that was a factor. But also many crew members of the fleet were already assigned to ships in the yard.

“Even if we have enough crew to retire overhauled ships, it slows down their overhaul process, which ends up affecting people in the future,” he said.

“We always said there were no crew issues – that they should be able to pull people from other ships into the yards,” he said. “They have the ability to take people off ships and yards and put them on revenue rides. They do it all the time.

But regardless, he says his members are happy to finally be called back to work.

In Angoon, grocer Shayne Thompson says he is relieved to have regular winter service on the way. He says demand for cyclists in the warmer months might be higher overall, but it’s mid-winter that’s a lifesaver.

“I feel like instead of trying to treat the ferry system like some kind of pseudo-cruise line, they need to start taking them offline in the spring or fall,” Thompson said. “So that in the middle of winter we have a ferry service when we really need it.”

The Matanuska ferry is scheduled to return from its overhaul on January 31. And with the Tazlina now on board, most southeastern communities will have regular ferry service for at least a few months.