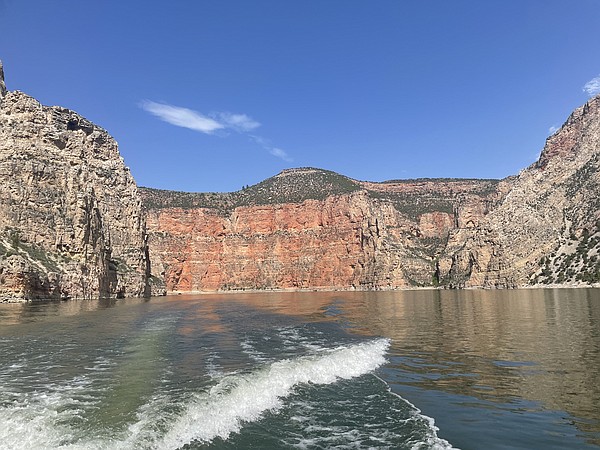 Jurassic Park has nothing on what lurks underground in Montana’s Badlands. Nearly complete dinosaur bones and skeletons have been found all around southeastern Montana. They are found buried under the ground and exposed along sandstone cliffs worn down by millions of years of rain, snow and ice.

Torrents of water from the Rocky Mountains 65 million years ago have flowed through the Badlands for several millennia, causing erosion and leaving fossils in their wake, said Makoshika State Park paleo intern Anthony Gordon.

Makoshika, Montana’s largest state park at over 11,000 acres, is one of 14 places along the Montana Dinosaur Trail (mtdinotrail.org) where dinosaur enthusiasts can view dinosaur bones and other fossils unearthed around the park in Glendive. The park’s visitor center museum features the head of a triceratops, found just outside the park boundary.

“Dinosaur tours are very important here and generate significant revenue for eastern Montana,” said park superintendent Riley Bell. “It brings families out that way and it’s good for the kids. We have a lot of hidden gems here.”

(READ MORE: A 76-million-year-old dinosaur skeleton will be auctioned in New York)

Southeastern Montana’s less traveled roads are full of breathtaking sites that often go unnoticed by tourists heading to the state’s most well-known attractions, including Yellowstone and Glacier National Parks.

“The Southeast has always been a hidden gem for Montana,” said Nicole Gonzalez, media manager for the Montana Office of Tourism. “And it’s getting more attention, which is amazing for local communities.”

The park, which also has miles of hiking trails, along RV hookups and rustic camping, was a highlight of my recent trip to Montana. Here are some other key takeaways from my visit to Big Sky Country.

Montana is a huge state with a small population, so if you turn off the major highways and take the dirt roads, it’s easy to feel quite isolated, and chances are you’ll come across at least one building or abandoned and scary house. But spend the night in the small town of Terry and you might encounter a ghostly apparition at the Kempton Hotel, Montana’s oldest operating hotel. Owner Russ Schwartz said there were four spirits roaming the old rooms and hallways.

“I found out who the ghosts are,” Schwartz said, counting them on one hand.

Two are children who died of typhoid at the hotel; one is a nurse who came to town to help with the typhoid epidemic and fell victim to the virus herself; and the fourth, Bernie Kempton, was the son of the man who built the hotel in 1902.

Book a room on kemptonhotel.net, if you dare.

FUN ON THE WATER

The Bighorn River is one of the best trout fishing rivers in America. The river runs through a dramatic canyon, and unless you’re a member of the Crow Nation, whose lands line its banks, the only way to see it is from the water. A cruise will take you past magnificent cliffs streaked with brick red from the oxidized iron minerals found in the sandstone and some of the most spectacular rock formations you will ever see.

Katie Steele and her husband, Tyler, own Shade Tree Outfitters (bighornproguide.com) and specialize in water fun along the Bighorn – fishing, boating, picnicking. You name it, they can probably fix it, Katie said.

“I love sharing the beauty of this river with other people,” she said as she steered her 18-foot Smokercraft downstream.

If you’re not quite ready for big league fishing, you might find your footing at Big Horn Valley Ranch (bighornvalleyranch.com), one of Fort Smith’s few resorts on the Crow Reservation. It’s also one of the few places around that offers full service catering. The resort has cabins with Wi-Fi and small kitchens. Private baths are offered in a central public bath.

In the center of the resort is a large stocked pond where you can cast a line and get some advice from the Paul Garrison Outfitter. He’ll bring the gear if you don’t have your own, and with his help you might be able to bring back the bulk.

From saddles to fancy ladies’ hats, the Range Riders Museum in Miles City (rangeridersmuseum.com) is a story across the West. The museum, founded in 1939, has a collection that took more than 70 years to amass and now encompasses more than 38,000 square feet of unexpected finds under one roof.

Exhibits cover everything from the age of the dinosaurs, to the history of the Native Americans who first lived in the area, to the soldiers and pioneers who followed. It’s a remarkable look at the people and things that have become Montana.

Dave Ramsey says debt consolidation solves nothing. Is he right ?