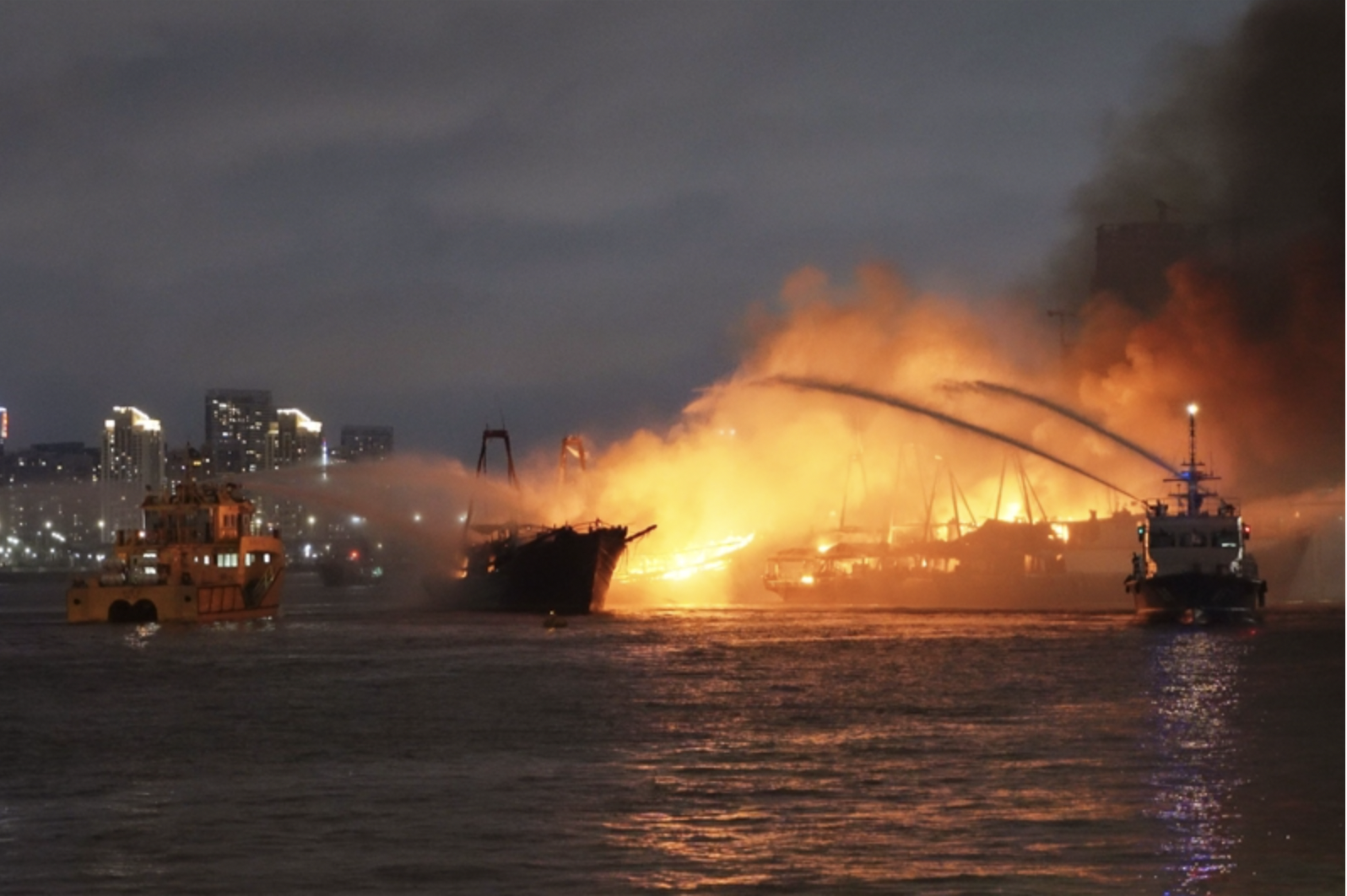 Six fishing boats were involved in a major fire near Ponte 16 in the inner harbor in the final hours of Monday, but no deaths or injuries resulted from the blaze, maritime authorities said.

According to the Office of Marine and Water (DSAMA), on the evening of April 25 around 7:00 p.m., a fishing boat caught fire in the middle of a row of a dozen fishing boats anchored in the jetty of the inner harbor off Hotel Ponte 16, with the fire rapidly spreading to adjacent fishing boats.

A customs patrol vessel first discovered the fire and maritime authorities dispatched 24 vessels to the scene and around 150 people for rescue efforts.

The large-scale blaze could be seen from most high-rise buildings in Barra, with several videos rapidly circulating online of the incident.

Customs dive teams and drone teams were also on hand to help, and six law enforcement vessels were also dispatched from the mainland.

Upon receiving the report, the local fire department also immediately dispatched personnel and vehicles to the scene and immediately opened two fire hoses on the boats about 100 meters offshore.

“The fire was essentially brought under control after about 2.5 hours, but it still reignited from time to time. DSAMA and customs continued to spray water on the fishing boats to cool them, and they will tow successively fishing boats to shore when conditions permit. Rescue work is expected to continue for some time,” the maritime authorities added.

The office contacted fishing groups to contact the owners of a number of the fishing boats involved and confirmed there was no one on board at the time of the incident and no one was injured during the incident. from the fire or sent to the hospital.

However, a 36-year-old man residing in Macau and a 63-year-old woman – each an owner of one of the affected boats – were sent to Conde S Januario Hospital due to “emotional agitation, shortness of breath and dizziness”. Ministry says MNA.

The regular ferry route between Wanzhai and the inland port was also suspended due to the incident.

The Fishermen’s Association and the Federation of Trade Unions said they would continue to monitor the handling of the situation and its consequences, and do their best to provide assistance to affected fishermen, Chinese-language newspaper Macao Daily reported.

As there is currently no open fishing season, all fishing boats are moored in the inner harbor during this time of year.

The associations noted that the damage to fishing boats will directly affect the income of fishermen, and the high cost of repairing fishing boats will also be a heavy burden for the affected fishermen and hoped that the government will take the initiative to take care and give appropriate assistance, such as providing maintenance grants to help fishers affected by the disaster.