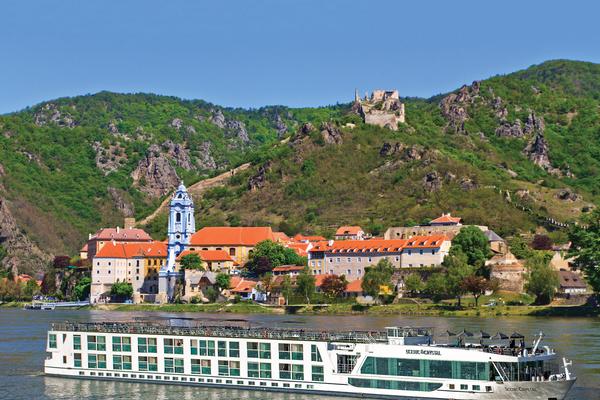 Scenic and Emerald River cruises resume in Europe this month

Scenic Luxury Cruises & Tours and Emerald Cruises from Scenic Group have both announced their return to sailing on several European rivers, from the end of July 2021 on the Douro River in Portugal. In addition to the Douro, the two brands will resume navigation on the Rhine in August. In addition, in August, Emerald Cruises will add the Danube while Scenic will resume its services on the French rivers Garonne, Gironde and Dordogne to Bordeaux. Scenic will launch its Danube cruises in September.

â€œWith Europe opening up more broadly to international travelers, it is exciting to see Emerald Cruises and Scenic resume navigation,â€ said Lisa McCaskill, Vice President of Sales and Marketing for Scenic Group Canada. â€œConsumer confidence is strengthening with the return to European rivers this summer and we are delighted to see an increase in bookings in 2022. We hope that with the great progress made in vaccination programs, Canadian travel restrictions will be reduced. raised over the next few months and Canadian residents will soon be able to join us on the rivers of Europe. “

Emerald Cruises’ first Douro cruise will depart Porto on July 31, while Rhine cruises will depart from Basel on August 19, followed by the Danube on August 30. At the end of November, the brand will resume the Christmas market crossings on the Rhine. and the rivers of the Danube. Emerald Cruises plans to operate no less than 38 river cruises in Europe between July and December 2021.

Scenic departures resume with cruises on the Douro River in Portugal on July 30, followed by Bordeaux in France on August 29, the Rhine on August 30 and the Danube on September 27. Scenic will offer six river cruises in Bordeaux, eight crossings on the Rhine, four departures on the Danube. , as well as three Christmas Market cruises in November and December. Sailing on several rivers will also take guests from Amsterdam to Budapest along the Rhine and Danube, with the brand preparing to operate two departures of the 15-day Jewels of Europe river cruise.

Both brands offer a flexible booking policy, where customers can postpone their travel plans or cancel up to 60 days before departure with no additional booking fees (third-party fees may apply). Parent company, Scenic Group, works closely with CLIA and local governments to ensure operations meet all necessary guidelines. Additional details on reservation policies and health and safety protocols are available on each brand’s websites: www.emeraldcruises.ca and www.scenic.ca.

Scenic Group, which includes Emerald Cruises, Scenic Luxury Cruises & Tours, Mayflower Cruises & Tours and Evergreen Tours, has grown over its 35-year history to include award-winning, river and ocean cruises and artisanal land trips that take customers to many of the world’s most fascinating destinations spanning all seven continents. Since 2008, Scenic has set the standard for truly all-inclusive five-star river cruises in Europe and Southeast Asia, as well as luxury cruises on the Volga in Russia aboard Scenic Tsar and on the Nile in Egypt at aboard a private luxury charter. In 2019, Scenic introduced Scenic Eclipse, The World’s First Discovery Yacht â„¢, an ultra-luxury 228-passenger vessel, and plans to deliver a second yacht of the same category, Scenic Eclipse II, in 2023. Emerald Cruises owns nine Star- Ships offering river crossings in Europe and on the Mekong, as well as the river vessel chartered along the Volga in Russia (MS Nizhny Novgorod). In January 2022, Emerald Azzurra will be the first yacht to be launched under the Emerald Cruises brand – a 100-passenger superyacht that will sail the warm waters of the Mediterranean, Adriatic, Black and Red Seas.

AmaWaterways to offer industry-first river cruises in Colombia, starting in 2023