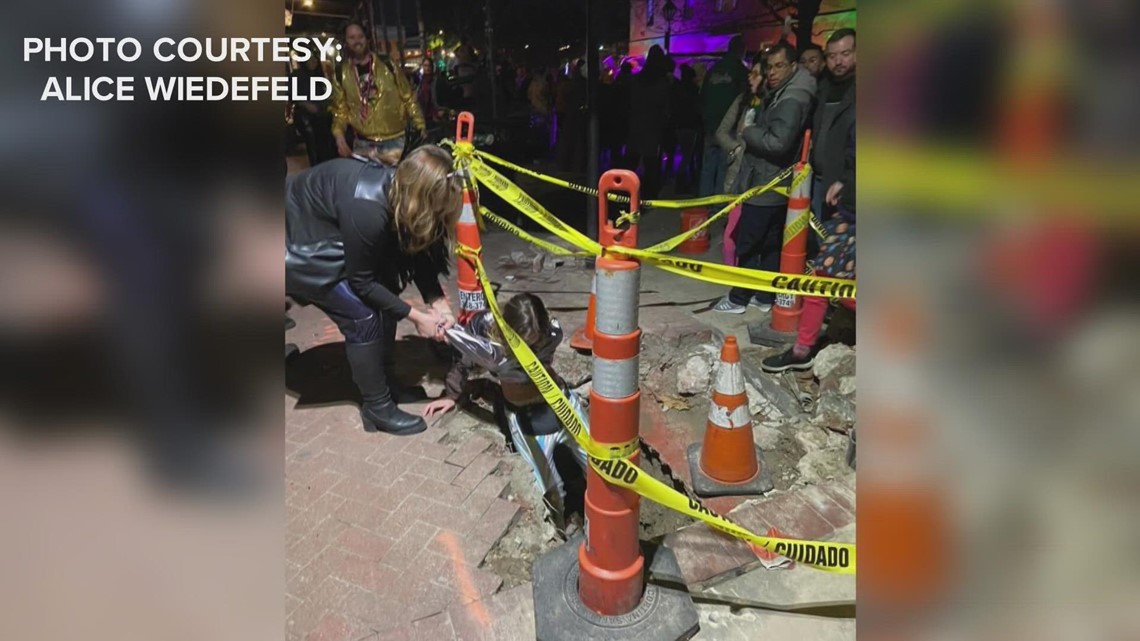 On St. Charles in the CBD, we found a hole several feet deep full of trash and exposed pipes. The hole is only covered with three wooden planks.

NEW ORLEANS – “Bumps in the Road” doesn’t even begin to cover it. After someone fell through a giant hole in the sidewalk in Chewbacchus over the weekend, Eyewitness News hit the road looking for unfinished construction projects, closed sidewalks and other messes along the routes parade in New Orleans.

During a four-hour trip across town, our team found nearly 20 hazards or other issues from Marigny to Uptown.

The first came just four blocks from the Zulu Parade route at Jackson and South Robertson, and another barrel of the Board of Sewers and Water is at Jackson and Oretha Castle Haley Boulevard.

On St. Charles in the CBD, we found a hole several feet deep full of trash and exposed pipes. The hole is only covered with three wooden planks.

And just across the Common Street intersection, a whole sidewalk is torn up and impassable.

If you’re counting, that’s eight drafts or messes that we could spot on the course for more than a dozen parries.

In Mid City, Endymion will go over a fairly large pothole on South White Street. And parade-goers on neutral ground will find an old traffic light at North Alexander and Orleans Avenue.

There is also a freshly filled pothole in Canal and North Prieur streets that Eyewitness News emailed the city about last week.

Heading towards Marigny, the road to Krewe Boheme starts badly with more than a block on Decatur. Part of the course is not even paved at Royal and Touro.

And along the French Quarter roads, there are orange construction fences everywhere. We found closed sidewalks on almost every block of the Krewe Du Vieux and Krewe Delusion routes.

You’ll find stacks of bricks or plywood covering the damage on St. Ann, St. Peter, Barracks, Urselines, and even a big mess on Governor Nicholls and Royal.

This mess actually included a mattress and a bag of trash last week until Eyewitness News asked the city about it. The city said it was part of “entergy gas exploration work related to a planned upcoming project on Decatur.” The city said it would be restored by this week.

Additionally, you’ll find a deep pothole with a protruding cone at North Rampart and St. Peter in the French Quarter, and two blocks of North Rampart Street are currently closed to traffic. Krewe Boheme should ride there on Friday evening.

If Chewbacchus was any indication, the krewes are ready to roll. But as the international spotlight shines on New Orleans this Mardi Gras, those issues will also be highlighted.

RELATED: Good weather continues over the weekend for parades

Bond and Boats was a great romance, but now it’s over