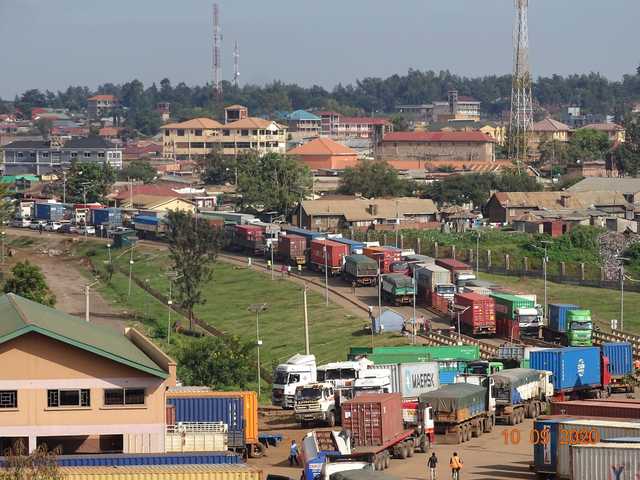 The Northern Corridor is exploring alternative transit routes in East Africa to increase freight transport and reduce the backlog at border points.

The transport corridor, long disadvantaged by the effects of the Covid-19 pandemic and facing fierce competition from the central corridor, is now considering alternative transit routes via Lwakhakha (Kenya-Uganda border), Nadapal (Kenya-Sudan border from South) and Todonyang (Kenya-Uganda-Ethiopia border).

The Northern Corridor connects the Kenyan seaport of Mombasa to the hinterland countries of Burundi, DRC, Rwanda, South Sudan and Uganda.

“To alleviate traffic congestion at the Malaba and Busia border posts and to provide alternative transit routes for truckers, the policy organs of the NCTTCA at their August 2021 session requested the Secretariat to undertake a investigation of the trade and transport logistics of the Northern Corridor alternative transit routes via Lwakhakha and Nadapal,” said Justus Omae Nyarandi, Executive Secretary of the Northern Corridor Transit and Transport Coordination Authority (NCTTCA).

“The opening of alternative transit routes through Lwakhakha and Nadapal will facilitate traffic through Malaba and Busia border posts. Traffic targeted to use this route includes cargo to South Sudan, northern Uganda and parts of northeastern DRC.

Although Kenya has many operating border crossings, only two – Busia and Malaba – are used by heavy duty vehicles.

However, with increasing traffic volumes on the Northern Corridor, these stations are overloaded, often resulting in long queues of trucks and delays in cargo clearance.

The survey conducted in October 2021, was validated by Member States stakeholders during a virtual workshop held on 9 December 2021.

“The survey observed that Member States have made progress in developing transport infrastructure on the Northern Corridor, contributing to increased volumes of goods traded and transported along the corridor,” Mr. Nyarandi said.

“Nevertheless, infrastructure gaps were noted and recommendations made to facilitate the use of alternative transit routes via Lwakhakha and Nadapal by heavy duty vehicles.”

Formal trade between Kenya and Uganda accounts for 32%, followed by trade between DRC and Rwanda at 19.1% of the total value of trade in the region.

Kenya is the largest exporter in the region.

The growth was attributed to tremendous growth in transit traffic for Rwanda, South Sudan and DRC, while Uganda and Burundi saw a slight decline according to the Northern Corridor Observatory 2021 report.

In the report, imports take the lion’s share of total freight throughput, accounting for around 80%, and resulting in an unfavorable balance of trade.

Uganda took most of the transit traffic through the port of Mombasa, accounting for about 76% of transit traffic, South Sudan stands at 10% and DRC at around 7%.

“The introduction of freight transport via the SGR from Mombasa to Naivasha and on the Standard Gauge Railway to Uganda will dramatically change the equation on the Northern Corridor,” Nyarandi said.

“The fuel jet through Kisumu Port has also seen significant transport volumes on the Northern Corridor.”

The Northern Corridor also envisions a transport route to Ethiopia. However, Kenya has yet to upgrade the International National Highway and the development of the Kimaeti-Malakis-Lwakhakha Highway off the Webuye-Malaba Highway.

“The transit road from Kainuk to Juba via Lodwar and Nadapal is under construction, but priority should be given to the construction of the one kilometer stretch of road between the entry/exit clearance stations in Kenya and South Sudan. South to Nadapal to allow heavy duty vehicles to use this road,” Nyarandi said. East Africa.

The Northern Corridor also expects Kenya to develop the road linking Moroto-Uganda to the Todonyang-Kenya/Ethiopia border via Lodwar.

The road has great potential to boost trade and tourism in this region between the four countries of Kenya, Ethiopia, South Sudan and Uganda.

“In addition, there is a need to officially declare a border post between Uganda and Kenya at Nakiloro/Lokiriama and a border post at Todonyang between Kenya and Ethiopia,” he explained.

The border crossings and the Moroto-Todonyang road will help provide connectivity with the Lapsset Corridor for shippers in Uganda and beyond who choose to use Lamu Port.

“It will also offer the shortest distance by road between Uganda and Ethiopia; about 250 km,” Mr. Nyarandi said.

The Northern Corridor received a boost last week following the reopening of the Katuna/Gatuna border between Uganda and Rwanda, which had been closed since February 2019 amid a diplomatic standoff between neighboring Commonwealth of Nations countries. East Africa.

The best walking routes in and around Neath Port Talbot

How to Choose a Debt Consolidation Loan Lender