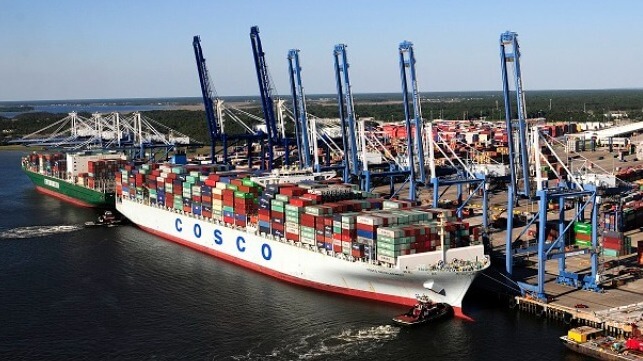 The record order book for new container ships will significantly boost the industry’s future capacity and operations. However, so far much of the focus has been on Asia-Europe routes where the first 24,000 TEU ultra-large container ships have been deployed and are reshaping port operations and deployments. However, the industry is not expecting new ships to change wider deployment patterns.

Alphaliner highlights the dramatic growth of transpacific routes. They report that over the past year, container capacity on routes between Asia and North America has increased by a quarter (24%), with most major carriers deploying additional capacity to grab a piece of the lucrative market. Many carriers highlighted the use of additional shippers beyond their normal hours as well as the introduction of new routes and services to capture market share. 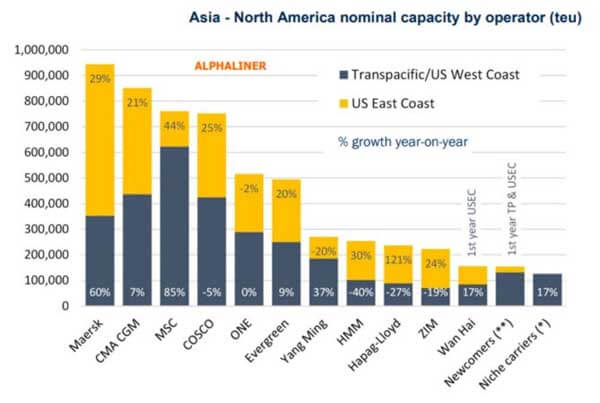 At the beginning of April 2022, Alphaliner calculates that there are a total of 702 container ships deployed between Asia and North America. In total, they report that capacity on Asia-North America routes has reached 5.75 million TEUs.

While reports of sizable ship backlogs lining up at Pacific Coast ports suggest much of the new capacity has been rolled out to U.S. West Coast routes, Alphaliner data underscores that the east coast of the United States has been the biggest beneficiary of growth and that it will continue to grow with the introduction of additional new services.

“The total capacity of all vessels deployed on the Asia-US East Coast services increased 28.1% year-on-year, compared to 20.5% growth for the fleet trading between Asia and the United States. the west coast of North America,” reports Alphaliner. They cite capacity increases from major carriers, including Maersk, MSC, CMA CGM, COSCO, Evergreen and Zim, as driving volume growth to East Coast ports.

This dramatic growth may well explain the large backlogs that developed in 2021 and 2022 off US East Coast ports. Marine Traffic analysts, for example, recently pointed out that as of early April 2022, there were more container capacity awaiting docks at US East Coast ports than in the notoriously lagging west coast ports.

The imbalance between East and West is only likely to increase in the months to come. Many analysts have predicted major carriers and shippers will divert shipments to East Coast and Gulf Coast ports to avoid potential disruption as contract negotiations for West Coast stevedores begin in May ahead of expiration. of the summer contract.

Carriers continue to respond to changing shipper habits, with Alphaliner highlighting the May introduction of a new Ocean Alliance-operated route between China and South Korea via the Panama Canal to ports in the east coast of Norfolk, Savannah, Charleston, Miami. They report that COSCO, OOCL, CMA CGM and Evergreen will deploy ten vessels with a capacity of between 10,000 and 14,000 TEUs on the route.

Market strength from Asia to North America has also drawn smaller carriers into the market, resulting in a surprising Alphaliner discovery that goes against many arguments. “The joint market share of the big three alliances has fallen from 82.2% to 67.7%,” Alphaliner reports, unlike the Biden administration which has blamed the alliances for many current market issues.

In the short term, with no sign of faltering import demand, these trends should continue to develop. US East Coast ports have all rushed to make critical infrastructure investments to increase their capacity and ability to handle the larger generations of ultra-large container ships expected to be deployed in ports in the years to come.

How to Get a Debt Consolidation Loan for Bad Credit