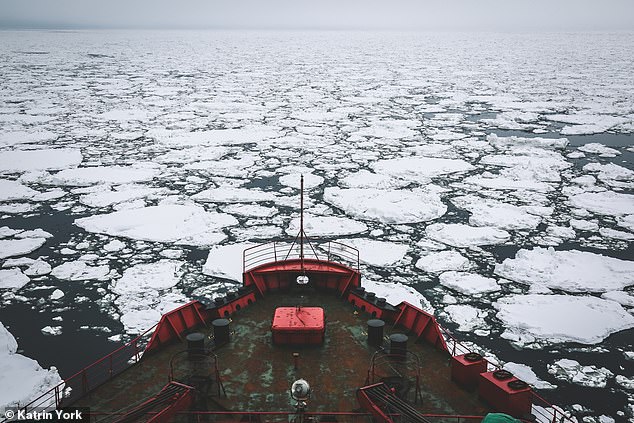 From the outbreak of wildfires to the melting of glaciers, the negative effects of climate change are well documented, but a new study suggests there could be at least one positive effect.

The researchers say that in just two decades, parts of the Arctic that were once ice-covered year-round will be reliably ice-free for months due to global warming.

It would reduce the carbon footprint of the shipping industry and weaken Russia’s control over trade routes through the Arctic, they say.

Examples of routes through the Arctic that will be made more navigable by melting ice include the Transpolar Sea Route and the Northwest Passage. 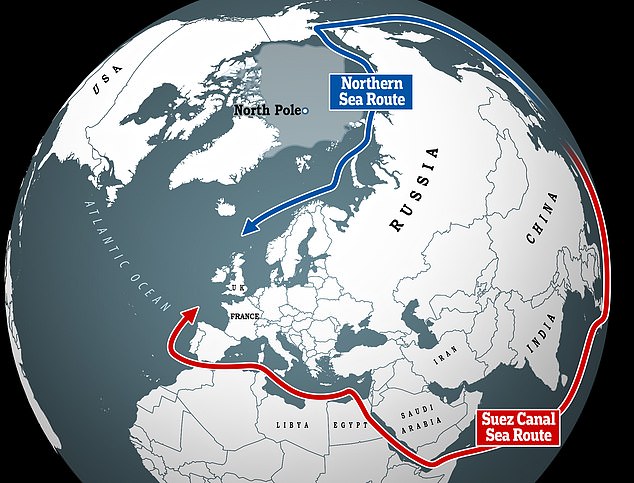 Due to heavy regulations along the Northern Sea Route imposed by the Russians, shipping lines often use the longer Suez and Panama Canal routes instead.

The study was conducted by climatologists from Brown University in Providence, Rhode Island, who worked with a lawyer from the University of Maine School of Law.

The Northern Sea Route is a sea route officially defined by Russian legislation between the Atlantic Ocean and the Pacific Ocean.

It runs along the Russian Arctic coast from Murmansk on the Barents Sea, along Siberia, to the Bering Strait and to the Far East.

The route is in arctic waters and parts of it are only ice free two months out of the year.

As the Arctic warms, the passage can be increasingly used for navigation.

Energy and time savings compared to the route normally used via the Suez Canal are around 30-40%.

Experts point out that Arctic climate change will endanger countless species that thrive in sub-zero temperatures, so it’s not entirely “good news”.

“There is no scenario in which melting ice in the Arctic is good news,” said study author Professor Amanda Lynch of Brown University.

“But the sad reality is that the ice is already receding, these roads are opening up and we need to start thinking critically about the legal, environmental and geopolitical implications.”

Lynch and his colleagues used computer modeling to determine the likely outcomes of global actions to stop climate change in the years to come.

The authors based their projections on four emissions scenarios, ranging from high emissions to the more limited warming of 2.7°F (1.5°C).

Projections have shown that unless world leaders manage to limit warming to 2.7°F over the next 43 years, climate change will likely open up several new routes through international waters by 2065.

The probability of a navigable season outside Russian waters has increased by almost 30%, with 99% confidence by 2065 in the highest emissions scenario.

But parts of the Arctic are warming so rapidly that they will be ice-free for months in just two decades, which would be enough to undertake maritime voyages.

According to legal scholar Charles Norchi, the changes caused by global warming could have major implications for world trade and world politics, especially in light of Russia’s war against Ukraine. 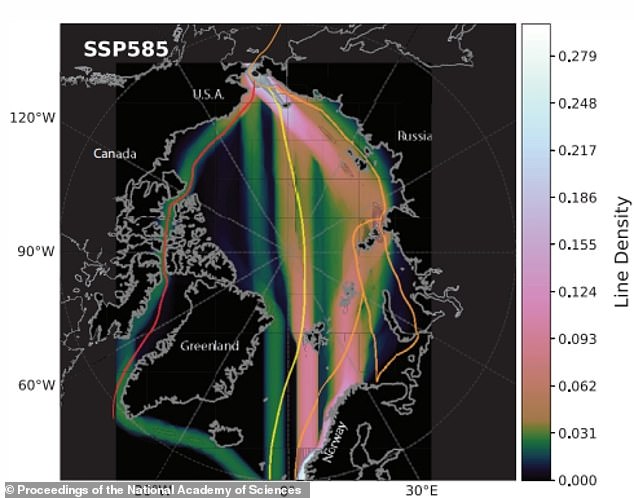 Since 1982, the United Nations Convention on the Law of the Sea has given Arctic coastal states, including Canada and Russia, greater authority over major shipping routes.

Article 234 of the convention states that in the name of “the prevention, reduction and control of marine pollution from ships”, countries whose coasts are close to Arctic shipping lanes have the ability to regulate shipping traffic from the route, as long as the area remains ice – covered for the majority of the year.

Norchi said that for decades Russia has used Article 234 for its own economic and geopolitical interests; for example, a Russian law requires that all ships passing through the Northern Sea Route be piloted by Russians. 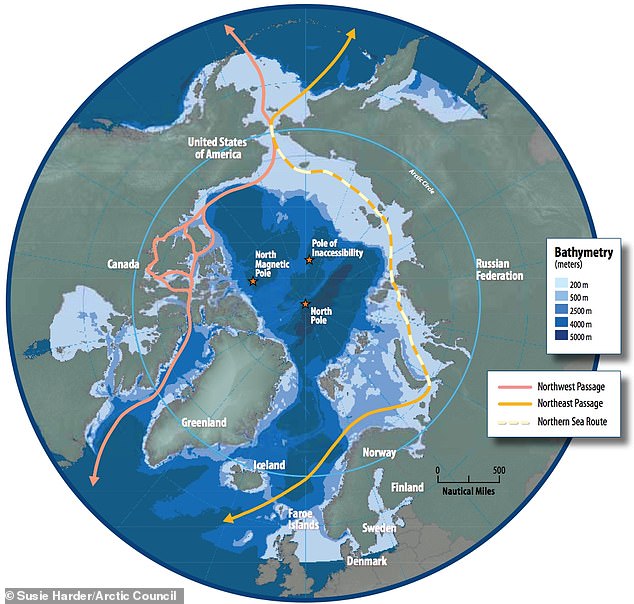 The country also requires passing vessels to pay tolls and notify in advance of their intention to use the route.

Heavy regulation is one of the many reasons why major shipping lines often bypass heavy regulations and high route costs and instead use the Suez and Panama Canals – longer, but cheaper trade routes and easier.

But as the ice near Russia’s northern coast begins to melt, Norchi said, so will the country’s grip on shipping in the Arctic Ocean.

“The Russians will, I’m sure, continue to invoke Article 234, which they will try to support with their might,” Norchi said.

“But they will be challenged by the international community, because Article 234 will cease to apply if there is no ice-covered area for most of the year.” 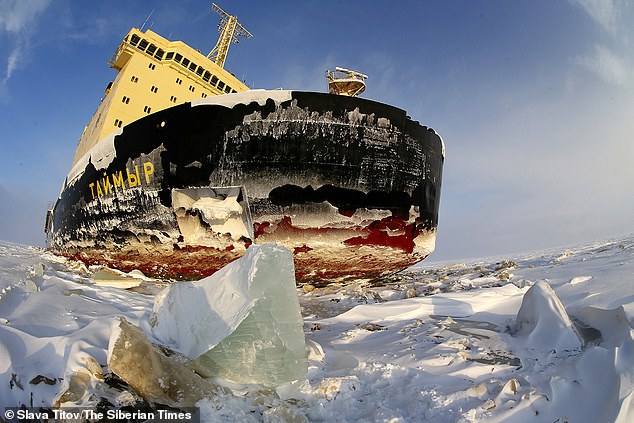 In addition, shipping will leave Russian territorial waters to go to international waters, against which Russia “cannot do much”.

According to Lynch, previous studies have shown that Arctic routes are 30 to 50 percent shorter than Suez Canal and Panama Canal routes, with transit time reduced by around 14 to 20 days.

This means that if the international waters of the Arctic warm enough to open up new routes, shipping companies could reduce their greenhouse gas emissions by around 24% while saving money and time.

According to the team, it is better to ask questions about the future of shipping now rather than later, given the time it will take to establish international laws.

For context, it took 10 years for the governments of the world to negotiate the Convention on the Law of the Sea.

“Signaling these upcoming changes now could help prevent them from appearing as a crisis that needs to be resolved quickly, which almost never goes well,” Lynch said.

“Designing international agreements with some forethought and deliberation is certainly a better way forward.

The new study was published today in the Proceedings of the National Academy of Sciences.

WHY IS SHIPPING EXPECTED TO INCREASE IN THE ARCTIC?

In August 2016, the first major cruise ship passed through the Northwest Passage, the northern waterway connecting the Atlantic and Pacific oceans.

The following year, the first ship without an icebreaker took the Northern Sea Route, a path along Russia’s Arctic coast that was, until recently, impassable by unescorted commercial vessels.

In recent decades, parts of the Arctic seas have become increasingly ice-free in late summer and early fall.

As sea ice is expected to continue to recede due to climate change, seasonal maritime traffic related to tourism and freight is expected to increase.

Voyages across the Arctic Ocean are already beginning, with the Russian route having the greatest potential for commercial vessels.

More than 100 ships passed through the Northwest Passage during this time, more than half of which were small private vessels like personal yachts.

Experts say even the North Pole could be passable within decades.