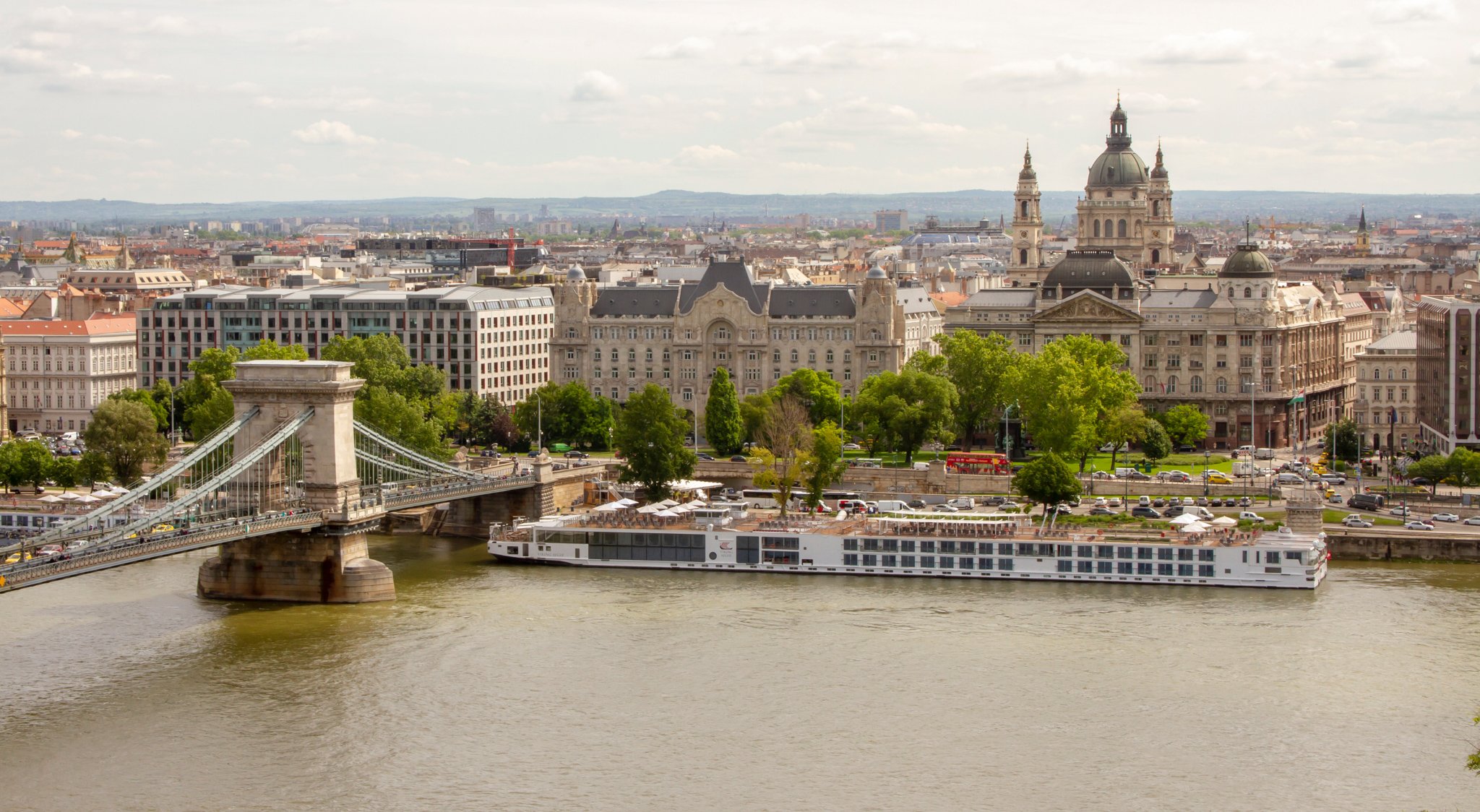 How to make the most of every stop

River cruising is a popular way to get the ease and convenience of a cruise while enjoying a more intimate experience.

Viking River Cruises is one of the most recognized names in the industry, and we were lucky enough to take their romantic eight-day Danube cruise in winter. The cruise’s stops vary from year to year and season to season, but each version has stops in Germany, Austria and Hungary.

During our trip, we wanted to indulge in one of our favorite travel hobbies: visiting different European Christmas markets. Not only did we immerse ourselves in many memorable Christmas markets, but we also explored charming, beautiful and historically significant towns.

Viking River Cruises Romantic Danube offers many different ways to optimize your time. Our experience was absolutely magical and we wanted to share some suggestions for getting the most out of each stop on this unforgettable itinerary.

We were invited by Viking River Cruises on their romantic route on the Danube. All opinions expressed are our own and are based on our experiences.

The Romantic Danube Route varies, sometimes starting in Hungary and other times in Germany. Stops may also vary slightly. But wherever your specific journey takes you along this beautiful river route, you’ll find plenty to explore.

Our route started in the German city of Nuremberg. Steeped in World War II history, it witnessed the rise and fall of the Third Reich. History buffs can visit the Nazi Party Rally Grounds, the Nazi Documentation Center, and other historical sites.

But as the second largest city in Bavaria (after Munich), Nuremberg also has a lot more to offer. The old town is home to beautiful half-timbered houses as well as the medieval imperial castle. Art lovers can visit the home of German Renaissance artist Albrecht Durer and explore the Germanisches Nationalmuseum and the city’s many art galleries.

Food is amazing in Nuremberg, so we recommend having at least one hearty meal or snack ashore. Don’t miss the city’s lean German sausages served three per bun or on a plate with sauerkraut or potato salad. Accompanied by an ice-cold local beer, it’s a perfect meal.

Stop by the open-air Hauptmarket in the city center for a colorful look at local produce, flowers, handmade gifts and delicious food delicacies. If you happen to be there during the festive period, you’ll see the Old Town transform into a winter wonderland where more than 180 vendors make up the Christkindlesmarkt. Stalls feature artwork, local produce, artisan products, and seasonal treats. Twinkling lights and fresh greenery add to the festive atmosphere.

Well-preserved medieval town on the northern part of the Danube, Regensburg has some of the most interesting historic buildings in Bavaria.

The Altes Rathaus is a bright yellow building dating back to the 1200s. The Thurn und Taxis Palace is the impressive residence of an aristocratic family that had amassed a fortune through postal operations in the early 1800s. a Christmas market is born in the park of the castle. The Porta Praetoria includes the ruins of a 13th century rough stone block gate. Neupfarrplatz, a Roman fortress built during the reign of Marcus Aurelius, later housed one of the first Jewish communities in Germany. The ornate German Gothic Cathedral of St. Peter is also worth a visit. Cross the Old Stone Bridge, a pedestrian walkway over the Danube, then turn to see the colorful Clock Tower.

A UNESCO World Heritage Site, Regensburg also offers great food. The Historische Wurstkuchl, or historic sausage kitchen, is 1,000 years old and is the oldest sausage kitchen in Europe, maybe even the world. If you have time, sit down for a while at Weltenburger am Dom, a restaurant and brasserie right next to the cathedral. Try the amazing schnitzel with a beer from Weltenburg Abbey, the oldest monastery brewery in the world.

Right on the German-Austrian border, Passau is a picturesque town. It is known as the city of three rivers, because it is where the rivers Danube, Ilz and Inn meet. Something you won’t find in many other places is a water booth, a graph illustrating flood flooding in the city center. It is drawn on a wall of the old town hall to remind us that if being at the confluence of three rivers can be beautiful, it is not without risk.

Art is important to Passau, with the city’s modern art museum and unique glass museum containing over 30,000 pieces of European glass art. Check out fun Artists’ Alley, where brightly painted cobblestones line the streets and cherished shops are brimming with one-of-a-kind memorabilia.

Passau is home to one of the largest pipe organs in the world, with nearly 18,000 pipes. It resides in the magnificent Baroque St. Stephen’s Cathedral. If the time is right, you could attend a concert for an unforgettable experience.

Modern delights in Passau include the Klostergarten, a contemporary park that houses farmers markets and gardens. It lights up at night with spectacular lighting, water features and choreographed fountains, perfect for an evening stroll.

As the romantic Danube cruise moves towards Austria, you will spot Melk Abbey rising majestically on top of a hill overlooking the Danube. More than just an abbey, it is a complex comprising seven courtyards, a beautiful church and a library with over 90,000 rare volumes and manuscripts.

Melk is located in the Wachau Valley, where small towns and monasteries flourished during the Renaissance. The landscape is wonderful. Several castles – including Schloss Schallaburg, Schloss Artstetten and Schloss Schonbuhel – beg to be explored, and the ruins of other castles dot the landscape.

If you are interested in local food and drink like us, the Wachau Valley is famous for its apricots and wine. In addition to great wines made from grapes such as riesling and gruner veltliner, apricot wine, apricot dumplings, apricot cake and some unique saffron items are also local delicacies.

Krems is the town at the other end of the valley and is sometimes part of the Romantic Danube Route.

Vienna is one of the most beautiful cities in the world. There’s so much to see, do and eat that you won’t want to waste a moment of your time.

We have to put Viennese culinary culture at the top of the list. Famous desserts like sacher torte and apple strudel, wonderful cafes, amazing farmers markets, delicious street food and a wide range of restaurants offer great opportunities to sample local delicacies. Most people don’t know that Vienna is also home to its own wine regions, which makes local wine a great option to try.

Music is another strong point of Viennese culture. The City of Music offers many places to choose from. The Musikverein, Vienna State Opera, Wiener Konzerthaus and Schonbrunn Palace offer concerts ranging from classical music by Mozart and Strauss to jazz, pop and rock, while cafes, bars and nightclubs offer food, drink and music in a more intimate setting.

World-famous palaces like Schonbrunn and the Hofburg as well as sacred spaces like St. Stephen’s Cathedral and Karlskirche impress with their magnificence.

Animal lovers can admire the elegant Lipizzaner stallions performing at the Spanish Riding School or visit Vienna’s Tiergarten, the oldest zoo in the world.

Budapest is actually made up of three different cities: Buda and Obuda on the west side of the Danube and River and Pest on the east side. It only adds to the intrigue of this unique destination.

The quieter side of Buda has hills and a funicular, which you can climb to the top for a great view of the Pest side. The city park is a great place to stroll, with botanical gardens, a municipal zoo, the Budapest Circus and an agricultural museum. There is also a huge timer containing sand that takes a year to go from top to bottom. Everything starts again with each new year.

The large market hall offers three floors of local products, prepared specialties, handicrafts and souvenirs. If you love shopping, be sure to stroll along Vaci and Kiraly streets, pedestrian streets full of tourist spots as well as fun local shops and cafes.

Budapest has several spas and thermal baths where you can relax while immersing yourself in history; many of these structures have existed since Ottoman times.

Budapest also has several phenomenal holiday markets, including the Advent Festival at the Basilica, considered one of the best Christmas markets in Europe.

The folks at Viking River Cruises know that the spectacular Hungarian Parliament building is a night sight. They usually provide the opportunity to view it while you’re on the water and create the perfect memory to last a lifetime.

What you need to know before you go

Viking River Cruises offers several excursions as well as a variety of options. Be sure to take the time before you go to explore what interests you and book anything further in advance, as space is often limited. While the ship is comfortable, the service pleasant and the onboard activities great fun, be sure to get out and explore at every stop. There are so many things waiting for you on your romantic Danube trip.