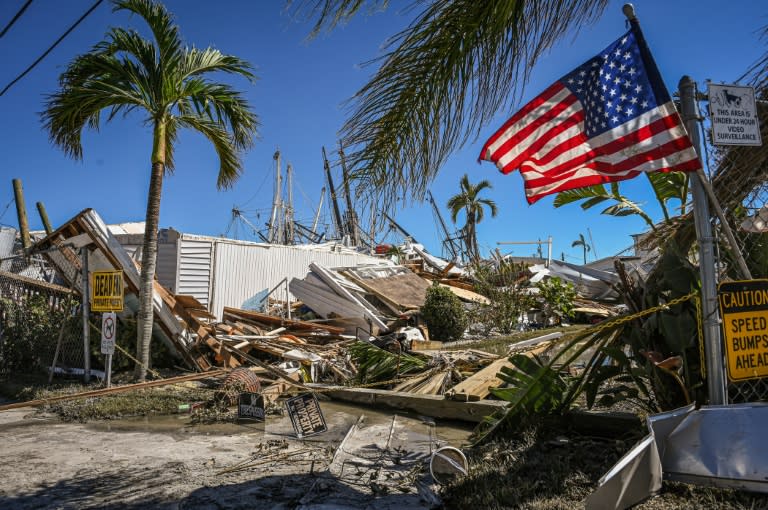 As Pete Belinda and his wife walked slowly down a road outside Fort Myers Beach on Florida’s southwest coast, they each dragged a large suitcase behind them.

“That’s all we have left,” Belinda said, shaken and visibly tired.

The city, a quiet spot on the shores of the Gulf of Mexico, became the epicenter of destruction when Hurricane Ian hit Florida on Wednesday as a powerful Category 4 storm.

The couple lived on the ground floor of their daughter’s house, where they moved six months ago, but the storm left them homeless.

“We don’t really know what we’re going to do now. We’re reaching out to friends and family to find a place to live for a while because we have nowhere to go.”

Fort Myers beach is now virtually deserted, traversed only by emergency service vehicles and the handful of people who have returned home take stock of what they have lost.

The part of town hardest hit by Ian, the area closest to the sea on Estero Island, has been reduced to a field of rubble.

Police have restricted access to those who do not live in the area, but photos taken from a helicopter flight showed the extent of the damage.

Strong winds flattened the wooden houses in the area – in some places there was not even rubble, just empty plots where houses once stood.

Rich Gibboni is one of those who lost his home.

“The second floor collapsed due to the wind and the first floor was flooded all the way to the second floor,” he said, looking resigned.

The 50-year-old man had come to another area of ​​Fort Myers Beach to look for supplies before returning to Estero Island, where he was taking refuge in a hotel with about 20 other people.

Nearby, 72-year-old holidaymaker Chris Bills dipped her hat on her head as she waited for a bus to pick her and her husband up.

Earlier in the day, a patrol from the emergency services had given them two hours to gather their belongings and leave the apartment they had rented near the sea.

The couple traveled to Florida from England to take advantage of warmer weather and weren’t worried about hurricane warnings.

“We didn’t think it would be that bad,” Bills said.

“I was extremely scared. We had never experienced anything like this before.”

In the neighborhood they were leaving, the force of the hurricane had left dozens of boats stranded in the streets – some still moored to pieces of pier – and dragged cars into a nearby bay where they floated.

But Gibboni said he had not given up hope after the destruction caused by Ian.

“We have to restart. It’s going to take a long time, so we just have to get back on our feet.”