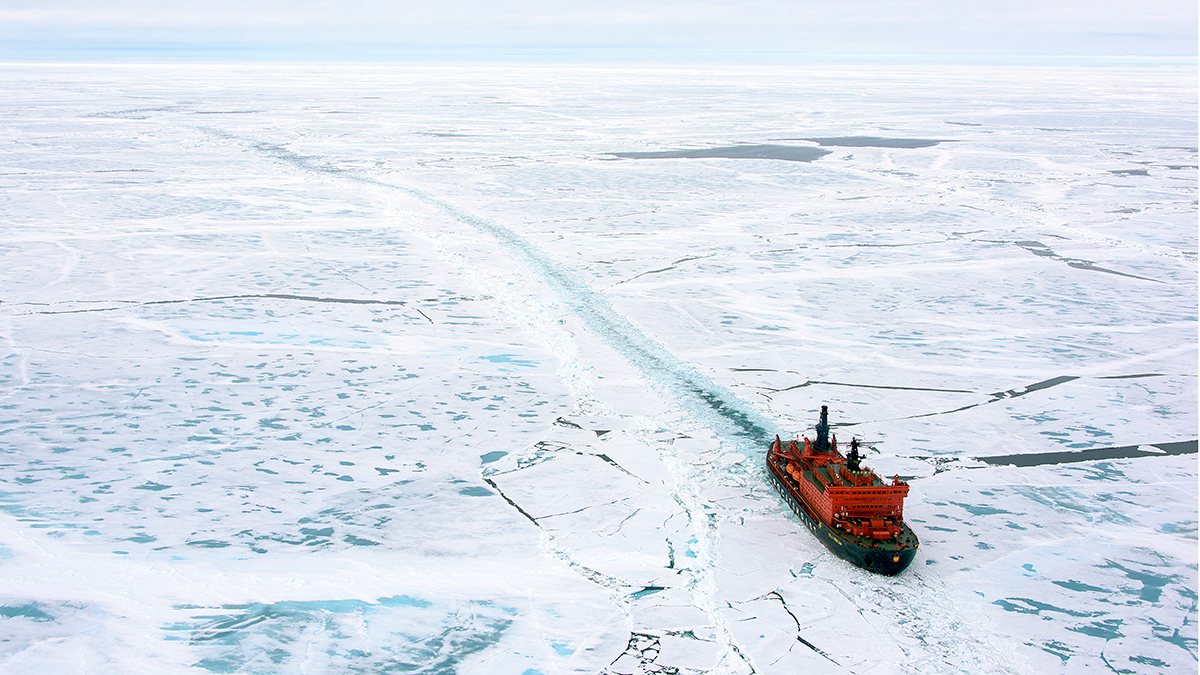 Controversy over shipping routes in the Arctic Ocean is intensifying in light of recent climate science projections of melting sea ice. By mid-century, ice-free routes in international waters once Sea-ice covered areas in summer could appear for the first time in recent history, according to new research. A more accessible Arctic could affect the timing, sustainability and legal status of international shipping.

Diverting ships from their original routes – often the Panama or Suez Canals – could reduce transit time and distance for many international voyages. And a small subset of shipping routes could significantly reduce their greenhouse gas emissions if redirected to the Arctic.

The extent of sea ice can even influence the scope of international law: currently, Article 234 of the United Nations Convention on the Law of the Sea grants coastal countries regulatory authority over the areas covered ice for most of the year. Though opinions differ, some have said shrinking sea ice could limit countries’ claims in the Arctic Ocean.

“There is no scenario in which melting ice in the Arctic is good news,” said climatologist Amanda Lynch of Brown University. “But the sad reality is that the ice is already receding, these roads are opening up and we need to start thinking critically about the legal, environmental and geopolitical implications.”

The extent of Arctic melting depends on global warming. Scientists have warned that warming the Earth well beyond 1.5°C will have disastrous and deadly consequences.

Pandemic supply chain disruptions and the Russian invasion of Ukraine have highlighted the delicate flow of global goods.

For some, the warming Arctic represents a business opportunity: according to a 2021 study of international shipping, it is 30% to 50% shorter than going through the Suez Canal. Travel time could drop by more than 2 weeks, depending on the speed of the ship.

However, those looking for a climate-friendly reason for Arctic shipping might be disappointed.

Zhaojun Wang of the Smithsonian Environmental Research Center, who conducted Arctic shipping research while a doctoral student at the University of Delaware, found that diverting a small subset of global maritime travel reduced their emissions by 24% on average, retaining approximately 264 metric tons. of fuel each.

But these voyages represent only a tiny fraction of maritime voyages: only 20 of the more than 500,000 international commercial voyages save money and time by taking the Arctic route. These diversions “will have a small impact on global emissions,” Wang said. She published the results in the Maritime policy and management reviewed last year.

According to new results in the Proceedings of the National Academy of Sciences of the United States of America (PNAS), melting ice could affect the footprint of Arctic law. Sea ice is preferentially retreating from the eastern Arctic near Russia.

“Dwindling sea ice means that the Russian state will not be able to make the same level of claims, at least not legally, across the waters,” said Charles Norchi, director of oceans and coastal law at the University of Maine School of Law, which participated in the new study. “What we have is the law and the geopolitical relationships that are really driven by the science of climate change.”

But Arild Moe, research professor at the Fridtjof Nansen Institute in Norway and co-author of the 2021 analysis of the Northern Sea Route, said Russia could retain control of traffic even when the sea ice disappears. “I don’t see any reduction in regulatory friction.”

There are many types of vessels that could take advantage of ice-free waters in the future: naval vessels, cruise ships, container ships, scientific vessels and transport vessels to offshore drilling platforms.

These ships would face a myriad of challenges in an increasingly ice-free Arctic. One of the most important is the fact that the ice in the Arctic will vary greatly from year to year. “Regardless of the climate change scenario trajectory we find ourselves on, interannual variability has remained very high for a long time,” said Lynch, who led the latest PNAS study.

Although 83 of the more than 500,000 trips were shorter and 45 saved navigation time in Wang’s sustainability analysis, only 20 were economically feasible. “We really think this is a surprising result, because people always talk about the Arctic as having great potential for navigation.”

The complications do not end there: it is difficult to obtain satellite navigation coverage in the Arctic, ice is difficult to predict, emergency operations are difficult and navigation is subject to various restrictions under of the Polar Code, which limits the size of authorized vehicles. Wang also expressed concern about the effects of invasive species on the fragile Arctic environment.

“While some shippers might prefer transarctic shipping, others might not,” Moe said. “Risk assessments and insurance are key here.”

But Norchi pointed to the possible benefits of diversifying shipping.

“The diversification of trade routes, especially considering new routes that cannot be blocked because they are not canals, gives the global maritime infrastructure much more resilience,” Norchi said.

Text © 2022. The authors. CC BY-NC-ND 3.0
Unless otherwise stated, images are subject to copyright. Any reuse without the express permission of the copyright holder is prohibited.

What is debt consolidation and how does it work?