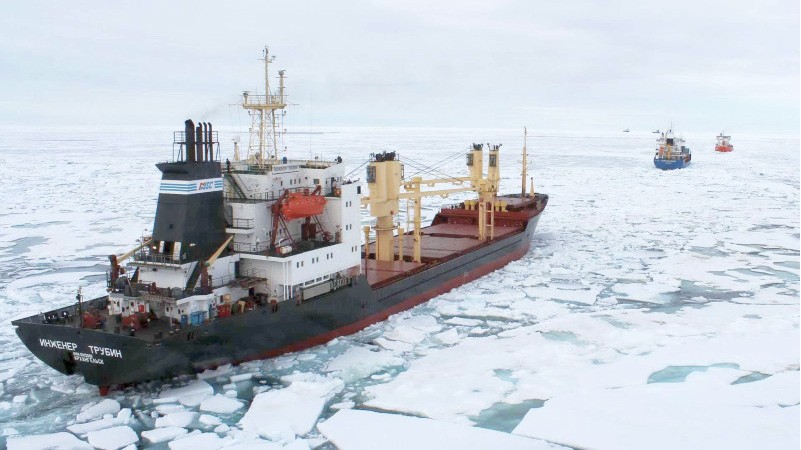 In March 2021, as global attention focused on the mega container ship Ever Given stuck in the Suez Canal, President Putin and his ministers were quick to proclaim that the Northern Sea Route (NSR) of Russia and the entire length of the Russian maritime Arctic were open for worldwide shipping. The argument goes, alternative sea routes to Suez through the Russian summit would be shorter, safer and more efficient. Even the well-known Finnish company Aker Arctic has released a new design for a small icebreaker container ship specially adapted for NSR operations.

Now, sixteen months later, with an invasion of Ukraine and recent operational issues plaguing the NSR, the tables are turned on Russia’s ‘grand vision’ of a new maritime highway facilitating trade across the Arctic Ocean. . From November last year to early 2022, commercial vessels were stuck in difficult sea ice along the eastern waters of Russia’s maritime Arctic. An extensive rescue and escort operation ensued using Russian nuclear icebreakers to extract more than twenty ships on foreign and domestic commercial voyages. Severe sea ice conditions early last fall also delayed cargo deliveries to northern communities for weeks. Observations made it clear that reliable and safe transarctic routes along the Northeast Passage, the historical name for sea routes from the Pacific to the Atlantic across the top of Eurasia, were impractical.

The entire four-month saga casts a dose of realism and doubt on the future of reliable maritime navigation in the Arctic. Many environmental uncertainties, economic limitations and practical navigational considerations that continue to limit maritime operations in this remote and dangerous ocean are exposed in this serious maritime incident. Few global carriers can survive such unpredictability of sea ice and the high risks of Arctic shipping.

The deep retreat of Arctic sea ice caused by anthropogenic climate change, monitored by satellites over the past four decades, provides better maritime access to the entire Arctic Ocean and promises longer navigation seasons. Russia has taken full advantage of these changes to facilitate maritime traffic along its NSR, a set of maritime routes defined by Russian law stretching from the Kara Sea in the west to the Bering Strait in the east; however, the Barents Sea is not included in the NSR definition. Domestic and foreign shippers successfully transport oil, liquefied natural gas (LNG) and hard minerals out of the Russian Arctic on destination or export voyages to Europe and Asia. Destination shipping is dominant today in the Russian Arctic and likely will be in decades to come. notably, only a handful of ships (61) sailed in 2021 on transarctic voyages along the Northeast Passage. Russian authorities hope to make routes to the east in the Pacific more reliable and available year-round to maintain a steady flow of oil and LNG exports. The clear national strategy is to move more Arctic gas from Western Siberia to Asia, especially true following the invasion of Ukraine with sanctions and port closures in Europe.

Yet this impressive Arctic shipping system does not portend a radical shift in global trade routes away from the Suez and Panama Canals. The use of the Arctic routes by the large container ships that are the main container shipping lines driving world trade is highly unlikely, contrary to what many have proclaimed over the past few decades. Their immense size, deep draft and lack of polar ship capability make them unsuitable for Arctic voyages. Indeed, Egypt’s recent announcement that it will expand the Suez Canal to carry more capacity and reduce the risk of future blockages, indicates that the canal’s roles in global shipping will increase. Traffic on the Suez will not be supplanted by crossings of the Arctic Ocean.

More complex key factors come into play when assessing the plausibility of transarctic travel. A basic and often misunderstood fact is that the Arctic Ocean will remain covered in ice, wholly or partially, for 6-8 months a year for decades to come. While access and navigation seasons are essentially seasonal, global container shipping cannot use Russian Arctic routes (or any routes) even if suitable vessels were available. The industry is not a turnkey operation where shippers can seasonally reroute trips into Arctic waters and away from traditional global routes where there are multiple stopovers.

There is no doubt that Russia’s NSR is a national Arctic waterway whose main purpose is to facilitate the transport of natural resources from the Russian Arctic to world markets. Russia can benefit economically if destination or export shipping can be maintained year-round with icebreakers and ship convoys, especially on winter routes from Western Siberia to Pacific and Eastern markets. ‘Asia. The NSR is also critical infrastructure to provide year-round maritime access using icebreakers in support of naval operations and to maintain access to Arctic ports and coastal waters. However, the fanciful pursuit by some of an alternate year-round Atlantic to Pacific trade route through the Russian maritime Arctic remains an implausible goal. It cannot be achieved solely through the regional withdrawal of sea ice. On the contrary, the future use of the Russian Arctic shipping routes will be dictated by international commodity prices and the economic dictates of the global shipping enterprise. These two drivers are inextricably linked to global responses to climate change in the era of energy transition. Therefore, great uncertainty and complex challenges, especially global economic linkages, remain for any expanded marine use in a more accessible Arctic Ocean.

Dr. Lawson W. Brigham is a Global Fellow at the Wilson Center’s Polar Institute and a research fellow at the University of Alaska Fairbanks. He chaired the Arctic Council’s Arctic Shipping Assessment.