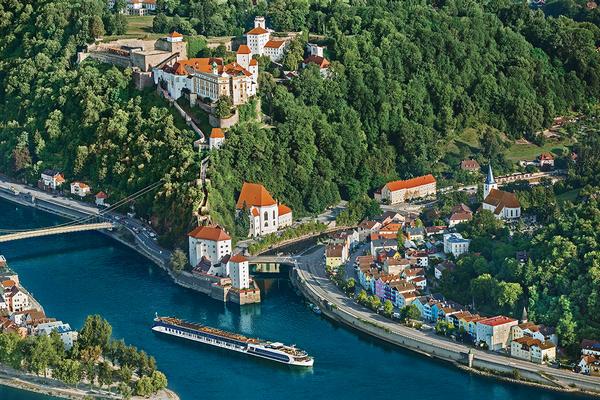 It’s unclear when American travelers will be welcomed back to Europe, but AmaWaterways chairman and co-founder Rudi Schreiner is hoping for a limited river cruise season later in 2020.

“I’m still hoping we’ll have a cruise in the North American market this year, but we’ll start again in March,” he told a virtual press conference. “I’m hopeful that by spring next year we’ll be back on all the rivers.”

AmaWaterways suspended all operations until September 30, except for AmaKristina, which began operating charter cruises on the Rhine on July 5 with German tour operator e-hoi. New health protocols are in place, and capacity is limited to 100 instead of 156.

“Germans like to travel but they are limited where they can go, so a lot of them stay in Germany,” Schreiner said. “The seaside resorts are all booked up and that’s also why Rhine cruises are so successful. They started marketing in June and the ship is pretty much booked until the end of October.

Beyond that, the booking cycle has been “wonderful” for cruises in 2021 or even 2022, he said. “June was actually the strongest month on record for bookings for next year. Part of that was a few new bookings from 2020 onwards, but also a lot of new bookings and a large number of groups and charters.

Among the changes made to restart cruising in the age of COVID-19 was the addition of plexiglass partitions protecting front desk employees and separating seating areas from the lounge. Passengers and crew undergo daily temperature checks.

Also new are private transfers for passengers booking a flight with AmaWaterways. Transfers will be limited to people traveling together, whether it’s a party of two in a private car or a family of six who will need a small van, said Gary Murphy, co-owner and senior vice president of sales. “We don’t put 30 different people in a coach,” he said.

Schreiner said the company is continuously monitoring the situation around the world, including in Africa, Southeast Asia and Egypt, where it will begin operating with the new 68-person AmaDahlia in September 2021.

Once the borders reopen, there will be an increase in demand, Murphy said, for all rivers.

Karst said many travelers looking for less crowded destinations so they can be in the fresh air opt for AmaWaterways cruises because they offer 25 to 50 bikes on each ship.

Interestingly, she said lesser-known destinations along the Lower Danube – such as Bulgaria and Romania – were seeing strong booking trends. So is Portugal.

“We stay engaged, which is what travel advisors are looking for,” Murphy said. “We’re planting seeds now, so when business bounces back – and it does – we’ll be there.”

The virtual outreach is attracting the attention of ocean cruisers who were looking for more information about AmaWaterways and river cruising.

Some might consider a river cruise because ships sail on rivers within a country – they would never encounter a situation like some ocean-going ships did when they were turned away from ports.

“We’re always close to shore, and if there’s any incident, we can get off right away because we’re in local waters,” Schreiner said. “It’s a safe environment.”

For now, Schreiner and his team remain hopeful.

“We don’t know exactly when the United States will be able to return to Europe,” he said. “It will depend on the cases in the future. Currently, the EU monitors the per capita figures for each country every two weeks. The US numbers don’t look as promising, but they’re down. We still hope to be able to sail by the end of this year, but we are not entirely sure.

The best cruises on the Seine in Paris