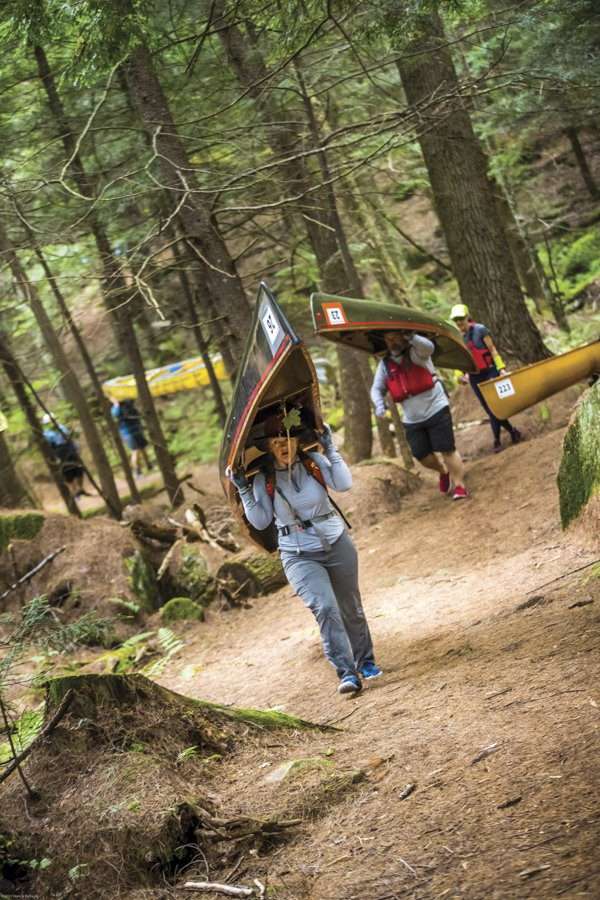 The waves are the biggest I have ever seen in unsalted water. Everyone lifts my canoe and drops it into the next hollow with a slap in the face. The shore is far away and I have a hard time keeping my boat upright. If the waves hit me askew, I will go for sure.

“It’s like ‘Deadliest Catch’,” I told myself. “It’s the angry ocean in Moana. Where’s Dwayne Johnson as Maui? Where’s the Little Mermaid ?!”

This is Middle Saranac Lake on day 3 of the 90 Miler. This is my first long distance canoe race. I did almost 70 miles of difficult paddling on days one and two. Only two litters remain, a few ponds, part of Lake Oseetah and Lake Flower.

In the distance, I can see other paddlers disappearing into the tall grass, like the Black Sox in the corn.

Any marathon runner will tell you that the race is happening in your head. It is your mind that you must convince not to give up, to overcome pain and doubt. My thoughts are a whirlwind of pride, sorrow and excitement.

The event is called the Adirondack Canoe Classic, but it’s better known as the 90 Miler, which is now in its third decade. Paddlers in a variety of wetsuits and boats paddle a section of the Northern Forest Canoe Trail between Old Forge and Saranac Lake for three days. The route crosses the Fulton Chain of Lakes, the Marion River, a small portion of Blue Mountain Lake, all of Long Lake, the Raquette River, Saranac Lakes, and Flower Lake. Portages are numerous. There are great waters, streams and narrow winding passages with just enough water to float a small boat.

Check out a gallery of images from this year’s 90 Miler race start at Old Forge, by contributor Jamie Organski

I grew up in boats. My first memory is of the night my dad brought a child-sized kayak into the house, put it on the orange and yellow shag carpet in our living room, and put me in the cockpit. . The boat was fiberglass and had a blue gelcoat. Dad was a boatbuilder, but it was an old town, and he probably traded one of his boats for it. I was 3 and years old before I paddled the boat myself, but he was already dreaming of the day.

I kept paddling this little whitewater kayak until I got it too big. I paddled class four rapids long before I could legally drive a car. I followed the same path as my father, he was a whitewater paddler who switched to canoes and calmer waters. The boats he designed were meant for strolling around lakes and streams, fishing, carrying supplies while camping from a distance, searching for wildlife, and taking pictures in seclusion. I spent my childhood summers doing all of these things except fishing. I could paddle my standing nine feet. In my family’s pond, I dumped water in my boat and captured frogs for a makeshift aquarium. When I was fed up, I overturned the canoe and swam like a turtle – my body was submerged, my face warmed by the sun breaking through the Kevlar.

I didn’t know anything about the 90 Miler until my husband Josh Trombley first competed in 2017. I was his pit crew for two years. Each paddler or team relies on someone to move their belongings each evening and meet the runners along the trail to give them snacks and encouragement. My dad was at the finish line every day watching Josh the two years he did it, but dad wasn’t interested in running the race himself. Me neither, until heel thorns kept me from running and I decided I wanted a new challenge. I had planned to participate in the 2020 race, but it was canceled due to COVID-19. In December, my father passed away suddenly. The months that followed were full of firsts: the first Father’s Day, the first birthdays, the first spring without him. Paddling brings me peace. Training for the 90s this summer gave me a goal. In the evening I hurried out of my home in Wilton to hike a nine mile loop to Spier Falls in Corinth. I ran the sun over the horizon, trying to be out of the water after dark.

I don’t have to wonder how my dad would have felt about this. He would have said little to me but all summer in his boat shop to everyone: â€œYou know, my daughter is paddling a 90. She has my boat, my 16 footer. Oh yeah, it’s a tough race, too much for me.

After hours on the water, I feel like a centaur, half woman, half boat. I curse the wind. I think about how I can describe the beauty around me, and how after long enough even beauty becomes boring. I think about my paddling strokes and how to make everyone count. The muscles in my shoulders, core, back and arms contract with the repetition of slice, pull-push, switch.

I think about my sons and how important it is for them to see their mother take on a challenge. I know they’re going to be there, and my nine year old, known for his volume ability since he was a baby, is going to scream, â€œMum! Mum! Yaaaay mom! Gooooo mom, you got this! The boys were at the finish line on day 2 and early on day 3. I’m not sure anyone else’s cheering team understands such a loud pair as my kids 9 and 11 year.

Passing boaters are friendly and talkative. There are 275 boats racing, teams of two, four or, in the case of a war dinghy, seven. Two men slide on stand-up paddle boards. Everyone teases them. I learn from racing veterans that every year is different, changing with the conditions and the weather. This year the water was high which made the course easier. We sympathize with the choppy water on Blue Mountain Lake at the end of the first day, and I find that several boats have capsized at Middle Saranac.

On the second day, I hear the Hamilton College boat crew singing songs from the musical â€œHamiltonâ€. They tell me that they are teaching it to a woman in the boat who has not seen the show.

Every day, several people say a few kind words to me about my father as we pass each other on the water. At Bartlett Carry between Upper and Middle Saranac Lake, a man approaches me to tell me about dad. I’m pissed off by the adrenaline and it shakes me when he chokes. Lifting the boat onto my shoulders, I take a deep breath, look him in the eye, and say thank you.

On Lake Oseetah, another stranger spreads even more kindness. My bow is covered in grass and lily pads and I feel like 10 pounds of drag. I am already exhausted, wet, irritated, sunburnt and windburnt. A man in a C2 canoe scratches the foliage with his paddle. Relieved, I have a burst of energy. More than a lake to browse. I know my kids are waiting for me at the finish line.

This article first appeared in the November / December 2021 issue of Adirondack Explorer magazine. Subscribe to receive 7 issues per year in your mailbox and / or inbox.